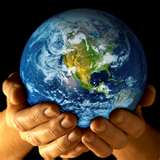 This Earth Day Carissa shares with us some reasons why a vegan diet is the environmentally sound choice, with excerpts from Rex Bowlby’s “Plant Roots: 101 Reasons Why the Human Diet is Rooted Exclusively in Plants.”

We also take a look at the aftermath of QuarryGirl.com’s exposé of VegNews Magazine’s use of photos from istockphoto.com, which were meat and dairy based, but said to be vegan – with some good news from the vegan community.