To start this show, we have a big announcement! As just made public a few days ago, the much anticipated “The Game Changers” film will be having its global première in theatres on September 16th! This film is executive produced by Arnold Schwarzenegger, James Cameron, and Jackie Chan. It’s a revolutionary new feature documentary about meat, protein, and strength, and showcases many elite-level athletes around the world who are powering their bodies to victories on purely plant-based diets.

Here is the NEW/UPDATED trailer for “The Game Changers” film:

Rich the Vegan, Scooting Across Canada to Raise Awareness About Veganism and the South Korean Dog Meat Trade

Rich the Vegan, on his cross-country tour of Canada to raise awareness for the animals.

For our first interview, we speak with animal activist Rich Adams, also known as Rich the Vegan. Rich is an activist from England who completes physical challenges to highlight the suffering of animals and to raise awareness for veganism.

Last year, in May 2018, he traveled across South Korea to raise awareness for the poor, forgotten dogs in cages and on chains, and victims of the Dog Meat Trade. His experiences in South Korea propelled him to this year’s challenge, which started on April 1st, where he is now scooting across Canada with a simple kick scooter that takes more strength and effort to move forward than a bicycle!

He crossed the border into British Columbia a few days ago, and joins us on this show from Golden, BC, where he is still on his journey after thousands of kilometres of pushing the scooter with all of his supplies for travelling. His campaign to scoot from the East Coast to the West Coast is called “Kathy’s Tail: Canada 2019”, and during it, he has already received some major mainstream press stories such as on local CTV news stations. With lots of meaningful stories to share, that hopefully are impactful for people who see or hear about them, people can then connect the dots for themselves with regards to how they love some animals, but not others.

In this interview, Rich tells us about his experiences witnessing the dog meat trade in China; about Kathy the dog, one of the victims of the meat trade whom he strongly connected with (likely a stolen companion animal), was luckily rescued but tragically died soon after; and how his experiences of being in a culture where humans eat dogs made him realize his own hypocrisy in judging people who eat dogs while he was eating pigs, cows and chickens. (The switch clicked, and he became vegan!)

Rich encourages our listeners to adopt a dog in need. Both the KDS Rainbow Sanctuary and ARK (Animal Rescue Korea) are two non-profit organizations who are working on the ground in South Korea, and linking up with rescuers in North America to save and adopt dogs out of the meat trade.

And some final sage advice from Rich: “Go vegan. Be a hero. Save your own life, and save multiple lives”. We can’t agree with that more! Good luck to Rich as he continues and finishes the last leg of his journey, arriving at his final destination of Vancouver the last weekend of July. 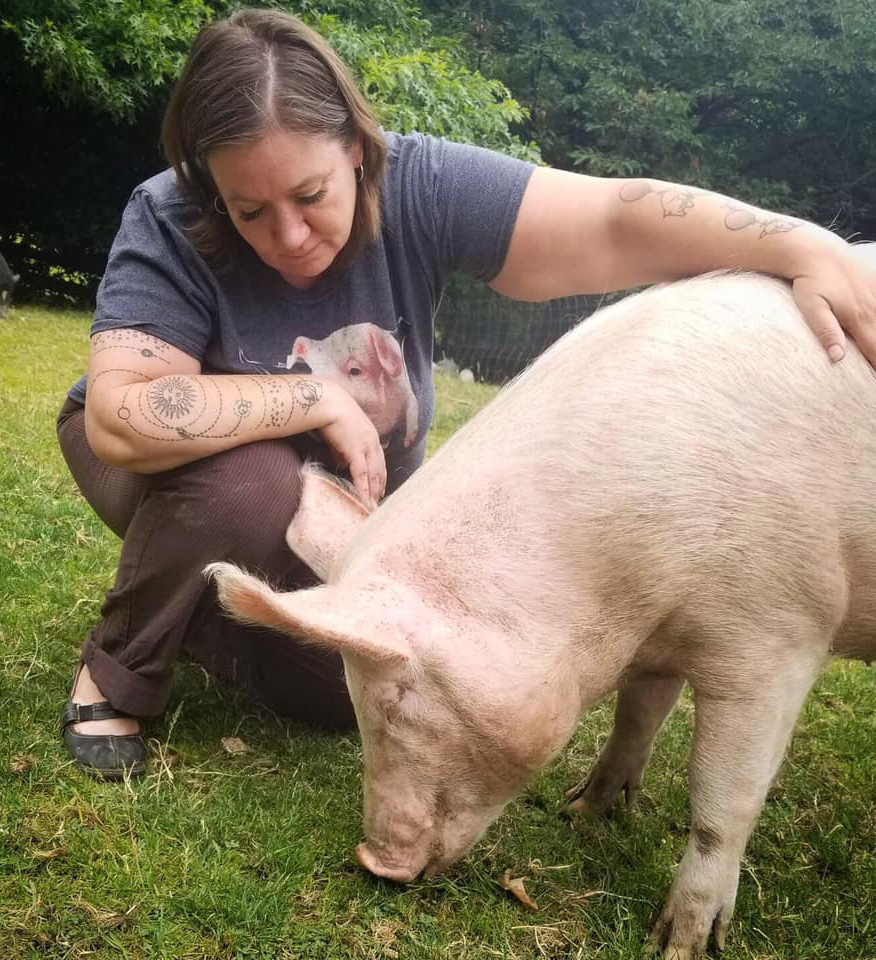 For our feature interview, we have special guest Carrie Shogan with us in the studio. Carrie is the co-founder of an animal rescue sanctuary in Aldergrove called the Little Oink Bank Pig Sanctuary, where pigs, and other animals in need, find their forever home. It all started with a piglet named Mathilda, and since last year, the non-profit organization has grown to become a safe haven for abandoned pigs, as well as for calves, sheep, cats, and dogs.

In this discussion, Carrie tells us about the issues of pot-bellied pigs in need of homes in British Columbia. This is a breeding and selling industry where sellers appeal to the hearts of people who they convince will be buying an adorable “tea cup”-sized pig from them. But there is no such thing as “mini” pigs, and pig guardians find themselves unable to care for their pig companions who grow bigger and bigger and become too much of a responsibility to handle. This is where Carrie and her sanctuary has come to the rescue, now rescuing over three dozen pigs in just the past few years.

The Little Oink Bank Pig Sanctuary has also recently become a forever home for other species of animals as well, including rescued baby male calves from the dairy industry, who would have otherwise been sent to slaughter. We told the “Story of a Christmas Miracle” in our New Year’s show early this year, in which nine newborn calves were surrendered from a dairy farm in Abbotsford. The rescue community had to work quickly to find homes for all these babies, and now, Alonso, Eddie, and Mister Misty are three of those calves (along with a fourth from the same dairy), who are lucky to be calling the sanctuary home. Carrie tells us about her role in saving these calves, who are some of the most gentle and sweet creatures you could ever meet.

In helping people make the connection between their food and the beings who are raised in the animal agriculture industry to be killed for consumption, the Sanctuary now offers tours, as well as hosts events such as birthday parties. As a fundraiser for the Sanctuary itself, The Little Oink Pig Bank Sanctuary will be hosting an event called “Diner Avec Les Cochons” (Dinner with the Pigs, for those who don’t speak French!) on August 10th, to help raise much-needed funds to run the sanctuary. Carrie tells us more about this event. For further info on how to buy tickets, you can visit the Facebook event page here, or purchase tickets at the Eventbrite page here.

We broadcasted a LIVE Facebook video stream of this interview (in addition to the podcast above), and you can watch it here:

← Activists Working to Challenge Speciesism: Plant-Based Cooking Classes, The Calgary Stampede and Protesting a Bacon Restaurant
A Movement for the Animals, for the Planet, for You: Nation Rising →