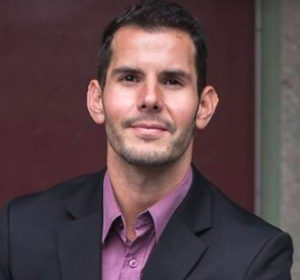 Jordan Reichert, Vancouver Island activist and West Coast Campaign Officer for the Animal Protection Party of Canada, is attending this year’s Calgary Stampede to show opposition to the archaic and senseless animal cruelty, as well as to inform the public that this kind of entertainment is unnecessary and needs to be banned.

The Animal Protection Party of Canada (Formerly Animal Alliance Environment Voters) is dedicated to raising awareness and improving the status of non-human animals across Canada, because these issues matter to Canadians.

Animal Protection Party is about more than non-human animals though; Canadians are demanding change for themselves, too. Environmental protection, healthcare, employment, and education are also of utmost importance to APP.

For years, activists have protested the Calgary Stampede, raising awareness about the injuries and deaths to animals that occur every year. In 2014, Vancouver-based activists Samantha Baskerville and Marley Daviduk disrupted the opening night of the GMC Rangeland Derby at Stampede Park by chaining themselves to a guard rail along the track, and were charged with public mischief and banned from the Stampede for life.

The definition of “stampede” from Webster’s dictionary is “a sudden flight or rush of a number of frightened animals”. I refer to rodeo as the “Hillbilly Olympics”, and in my research for today’s interview, I watched some Youtube videos from past Stampede events. The worst of them was the steer wrestling competition, where two cowboys on horses come running out of a gate where the steer has been given a 10 foot head start, and one of the cowboys jumps off his horse to land almost on top of the steer in order to crank his neck by the horns and slam him to the ground.

It’s horrific animal cruelty and I cannot believe that in this day and age we have this as a “sport.” The Vancouver Humane Society has been keeping track of the injuries and deaths that have occurred in the past history at the Stampede, including two human deaths. You can contact the Stampede sponsors in defense of the animals here. 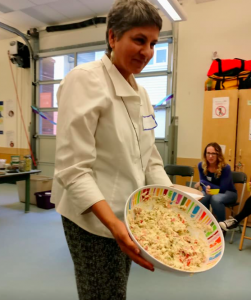 Bimala Spencer and her partner know that the best way to a person’s heart is through their stomach, and so have found a unique form of activism: teaching healthy lifestyles via cooking classes to residents of New Westminster.

Granted funds from the Vancouver Foundation’s Neighbourhood Grant and Family Services of Greater Vancouver, Bimala has been buying and prepping groceries for her community cooking classes and having a lot of fun with her neighbours (who may be more interested in the health aspect of veganism), but she does hand out vegan leaflets and magazines which educate her students on the ethical reasons to eat plant-based.

She has a Facebook group called “New West Plant-Based Cooking Club“, where she posts recipes and photos from class.

Marni Jill Ugar is one of the most dedicated activists in the Toronto area, lending her time to multiple animal rights campaigns. She works with GRASS Toronto (Grassroots Anti-Speciesism Shift) to challenge social norms when it comes to human exploitation of animals. Most recently, she and her group have been protesting outside the Toronto restaurant Bacon Nation, which she heard about by seeing one of their trucks that said “Go Pig or Go Home” and “Pork Star”.

The restaurant’s management post very insensitive memes on their social media account, so if you feel inspired to speak out for animals, please comment in defense of animals. Below is a photo of Marni and her team outside Bacon Nation, and an example of the restaurant’s social media posts:

Marni Ugar, in the middle, on the megaphone at a recent disruption at Bacon Nation in Toronto.

← Nation Rising – A Report on Their Second Annual Rally. Also the Captivating Truth About Frogs with Matt Ellerbeck
Carrie Shogan, Living the Sanctuary Life at Little Oink Pig Bank Sanctuary, and Rich The Vegan’s Canada 2019 Tour for the Animals →