This week’s show is dedicated to implementing public outreach among school administrators and food service professionals to bring more (and healthy) plant-based menu options to a school or hospital cafeteria near you!

To start the show, Jen updates us on the ongoing work she is doing to free cetaceans from captivity. We’ve had a recent win with the Vancouver Aquarium, when the Park Board voted a few weeks ago to no longer house (additional) cetaceans at the Aquarium for display. Now Jen is working to have Bill S-203 passed, which is a Senate bill that will ban the breeding and keeping of whales and dolphins in captivity nation-wide. Please spend a few moments to fill out this petition to let your Member of Parliament that you want them to vote in support of protecting whales and dolphins! 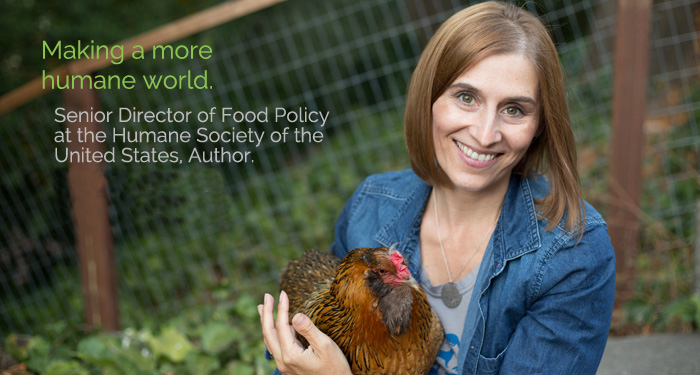 Kristie Middleton, in honour of International Respect for Chickens Month!

For our first interview, we have Kristie Middleton. She is the Senior Director of Food Policy for the Humane Society of the United States, where she directs the organization’s efforts to increase plant-based eating. She works with institutions across North America to educate food service professionals in gaining insights into the latest trends in both implementing and marketing plant-based menus. This work is done in establishments such as universities and hospitals, and you can find out more information about the Forward Food program here.

Kristie is also the author of a recently published book called “Meat-less: Transform the Way You Eat and Live – One Meal at a Time”, which covers many of the issues of why to cut out meat and animal products from your diet, and how. (Lots of recipes, too!)

In this interview, she tells us about about her work in getting healthy vegan food in dining halls, cafeterias and hospitals, which serve thousands of people in need of better options. She also tells us about the growing trend of interest in vegan food, and about how both institutions and individuals who are deep-seated in tradition can break out of the psychology of maintaining habit and the status quo by becoming educated and training both the hands and the mind to adopt healthier ways to live, for the people, the animals and the planet.

Take a look at this fun video that highlights some of the culinary training with chefs and cooks at the University of California-Berkeley that has been an encouraging success! 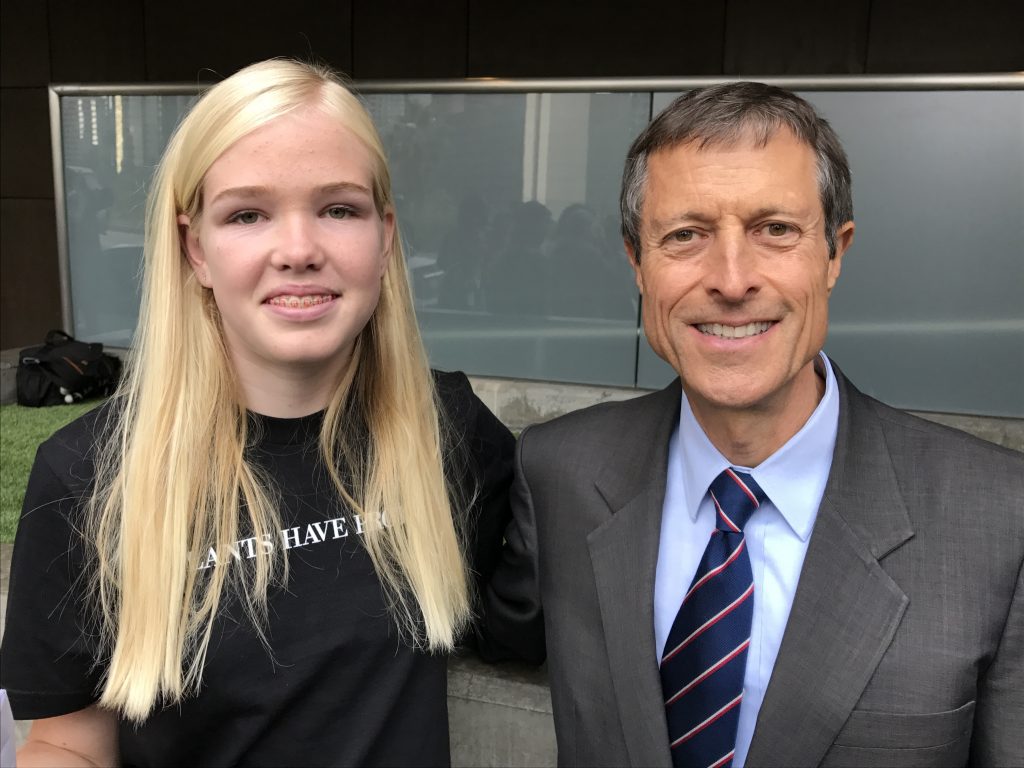 Lila Copeland with Dr. Neal Barnard of the Physician’s Committee.

For our feature interview, we have Lila Copeland on the show, who is a 15 year old vegan activist from California who is changing the world! In 2011 at age 10, she founded the Earth Peace Foundation. Its mission is to achieve peace between all species and to preserve the earth’s ecological soundness for future generations by revolutionizing into a plant-based society.

Two years ago, Lila launched the Healthy Freedom Campaign, and since then she has been working hard to get the L.A. School District to improve cafeteria menus with healthy plant-based options. Just less than three weeks ago, she achieved this goal, when the LAUSD decided to launch a plant-based pilot program within its schools. What a success! Lila had the support of many high-profile vegans, who came to speak on behalf of the campaign and offer help, such as actress Pamela Anderson, body builder Torre Washington, marathon record holder Fiona Oakes, “Cowspiracy” filmmaker Kip Anderson, and the Physician’s Committee Dr. Neal Barnard.

Lila is an educated and deeply outspoken activist for the animals and the planet, and she has been an animal activist since she was 4 months old! In this interview, Lila tells us about her vegan and activist journey at such a young age, and what inspires her to fight for the animals in her ecosphere of the Los Angeles School District, where she goes to school. (and she plans to take campaign this state-wide as well; there is still a long way to go)

Lila also tells us about how she initiated this campaign (which has the potential to reach the 600,000 children in the LAUSD), the challenges she has faced, and gives advice for other passionate citizens who want to help offer healthy and compassionate options in their own geographic areas.

← The Startling Intelligence of the Common Chicken
World Oceans Day: Sounds in the Sea, & Direct Action with Sea Shepherd →