September 22nd is National Elephant Appreciation Day. This show is dedicated to the elephants and rhinos.

Last Sunday, animal advocates around the world participated in the annual March to Close All Slaughterhouses, and Vancouver held its first edition of the event! Around 200 compassionate people came out to march through the streets of downtown Vancouver and speak loudly for the billions of animals who are tortured and slaughtered every day.

We discuss how the event went and then review our version of vegan heaven, aka the new vegan pizza and ice cream eatery Virtuous Pie, which just opened its doors to eager crowds last weekend for the first time.

For our first interview, we have Fran Duthie on the show. She is the co-founder of a group called Elephanatics, which is an elephant advocacy organization located in Vancouver. Its mission is to help the long-term survival of African and Asian elephants by raising awareness and disseminating information regarding the challenges and suffering elephants face in Africa’s poaching crisis and in Asia’s tourist trade.

The Global March for Elephants and Rhinos takes place worldwide next Saturday, September the 24th, and Elephanatics will be hosting the Vancouver edition that day.

In this interview, Fran tells us about some of the work that Elephanatics does to educate the public on endangered elephant issues, particularly in schools, and what Canada’s current status is on the important of ivory. She also explains to us the trade for rhino horn and the crises facing rhinos as well.

The Convention on International Trade in Endangered Species of Wild Fauna and Flora (CITES) takes place in Johannesburg this year and starts on September 24th, the same day as the Global March. Elephanatics urges the public (that’s you!) to sign this petition to CITES to ask them end the ivory trade.

Patricia Sims, filmmaker of “When Elephants Were Young” 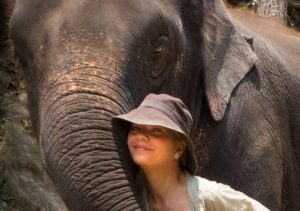 Our feature interview is with Victoria filmmaker Patricia Sims. Patricia is the founder of World Elephant Day, and has also produced documentaries around the world, focusing on nature and conservation education, and the interrelationships between humans and animals.

Her most recent film, “When Elephants Were Young”, was just released last month, and it explores new strategies for the future of human-elephant relations and the survival of all elephants. In this documentary, actor William Shatner narrates the story of a young man and his young elephant living together in Thailand. 26-year-old Wok has been caring for Nong Mai since she was three. Nong Mai is one of 35 captive elephants in Wok’s village in north-­eastern Thailand. Here, the traditions  of elephant keeping have been passed down from generation to generation.

Patricia tells us about the issues covered in the film, such as the human-elephant domineering relationship that goes back to Paleolithic times, and how times are changing now in a society that is starting to recognize that these elephants belong back in the wild, and not in captivity.

← The Cruelty of the Captivity Industry
Vegan Stories, Thanksgiving Activism, and more! →

1 comment for “The Elephant Show: Patricia Sims, filmmaker of “When Elephants Were Young”, and Fran Duthie of Elephanatics”