Listen to the show here: [display_podcast]

We start off today’s show by discussing the past week’s pride events, and how we have included the animal liberation message. Also, we chat about the problematic highly corporate presence in the pride parade, which has essentially changed it from a liberation march to a street party / marketing ploy. 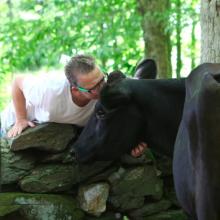 pattrice jones is an ecofeminist writer, scholar, and activist. As an ecofeminist educator and activist, pattrice frequently lectures on subjects such as the intersections of racism, sexism, speciesism, homophobia, and the exploitation of the environment.

pattrice has taught psychology and women’s studies at Minneapolis Community & Technical College as well as gender studies at Metropolitan State University in St. Paul. She has also  authored scholarly articles rooted in her observations of and work with the animals at the sanctuary.

We share our interview with pattrice, where we discuss VINE Sanctuary (which she co-founded), queer liberation and its connections with animal liberation.

← Top 6 Vegan Food Picks of L.A., and Highlights of the 2014 Animal Rights Conference
Animals Are Not Things, and Gena Hamshaw on Choosing Raw →