Listen to this show here! (and on Google Play and Apple Podcasts)

Peaceful Sit-In of 6 Concerned Animal Advocates at the BCSPCA Office is No April Fool’s Joke. We are joined (separately) by arrested activists Zoe Peled and Frank Metivier. 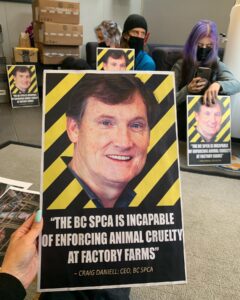 17 police cars, 3 paddy wagons and 30 police officers, including  the Gang Task Force of the Vancouver Police department made an appearance at the peaceful protest of animal activists at the office headquarters of the BCSPCA last Friday, April 1st, and this is no April Fool’s joke! Our guests Zoe Peled and Frank Metivier were two of 6 peaceful protestors who entered the BSCPCA main office in Vancouver last Friday to ask for a meeting to speak with CEO Craig Daniell, who refused to engage.

Mr. Daniell has said since the activist discoveries at the Excelsior Hog Farm in 2019 that “the BCSPCA is incapable of enforcing animal cruelty laws at factory farms” and that he would like the charity to step down from this responsibility and to “collaborate” with other animal advocates to find a solution to this issue which has resulted in no action or charges taken against the Excelsior Hog Farm from the hundreds of hours of video footage that was submitted to then 3 years ago.

Instead of starting the conversation, the Vancouver Police were called and they arrested and took away the peaceful activists. Zoe and Frank share their experiences in this interview.

Excelsior 4 Activists Roy Sasano and Nick Schafer on the Aftermath of the Pre-trial for Exposing Animal Cruelty at a Hog Farm in Abbotsford, BC 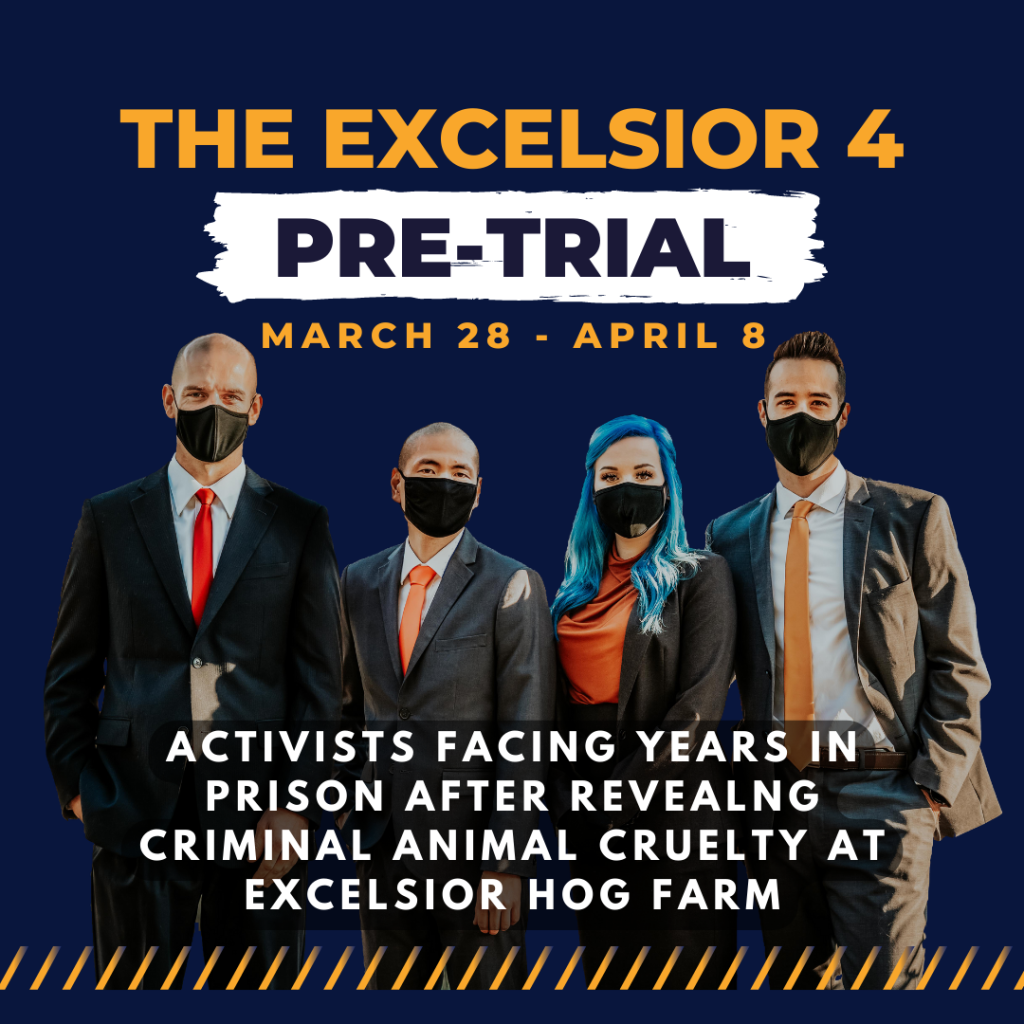 For our feature interview this week, we speak with two members of the Excelsior 4, Roy Sasano and Nick Schafer, live in studio! Court let out a day early, so they are here to share with us their thoughts in the aftermath of the 2 week pre-trial, also joined by comrade and fellow activist Kira Cheeseborough.

The BC animal activists known as the Excelsior 4, Amy Sorrano, Roy Sasano, Nick Schafer and Geoff Regier, are being charged by the Crown with a total of 21 indictable offences and up to a combined 210 years in prison for exposing egregious animal cruelty at the Excelsior Hog Farm in Abbotsford, BC in early 2019. We have covered this event and subsequent consequences on several shows in the past 3 years. Just search “Excelsior” or “Meat the Victims” on this website to find those podcasts. 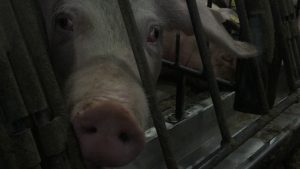 One of the beautiful pigs at Excelsior Hog Farm who has since been slaughtered for bacon.

Excelsior, like most typical farm, a factory farm, housing thousands of pigs from birth to slaughter. This is where your bacon comes from, if you eat that, and live in British Columbia. This farm is known to be the best of the best in terms of a “high” standard of animal welfare in BC and the country, but what I (radio host Alison Cole) and 50 other activists saw that day inside the farm would blow your mind.

Bleeding and dead pigs piled in the dumpster outside the barn, and inside the barn, mother pigs packed into tiny gestation crates where they cannot move or even turn around, infected with open wounds, such as many pressure sores from being pushed against the bars all the time, large balls of tumours on their bodies, open gashes and bleeding, and exhibiting common signs of stereotypy in constantly swinging their heads back and forth, biting the iron bars of their stalls and foaming at the mouths.

I even witnessed one labouring mother give birth to a malformed fetus. She was in pain, for hours. Plus, the deep stench of ammonia in the air, due to an open floored toilet, which was very difficult to breathe in, and not to mention, feces everywhere.

Roy joins us on the show to speak about his general thoughts on the case, sharing some updates (pre pre-trial) that we have recently come to light. And he gives us his impressions on the conclusion of the pre-trial and what may be in store for the 4 when the “actual” four week trial starts on June 27th.

This is an interview you are not going to want to miss!

Please have a look at this evocative 5 minute video, that Excelsior 4 activist Nick Schafer has produced, to learn more about the original “Meat the Victims: Canada” action that took place on April 28th, 2019, where 50 activists were arrested, and then the 4 charged.

← Encore Show: “Meat The Victims Canada” Activists Expose a Modern Pig Farm in Abbotsford, BC
Encore Show: Interview with Founder of Rabbitats Rescue Society on Feral Rabbits and the Ongoing Fight to Save Through Humane Rescue and Micro-Sanctuaries →