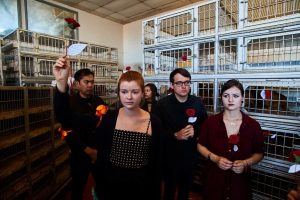 Gillian Walters interviews a newly-famous activist live from Berkley, California. Cassie is an organizer and investigator with the grassroots animal rights network Direct Action Everywhere. She is a student at UC Berkeley and the president of the Berkeley Organization for Animal Advocacy.

On October 22, Cassie was one of 23 activists arrested on trespassing charges while participating  in an open rescue at Saba Live Poultry,  an Oakland butcher and slaughter house. The rescue was streamed live and made national headlines.

200 people from all over the country participated in this groundbreaking action in which a lamb, quail and a bunny were saved from slaughter. 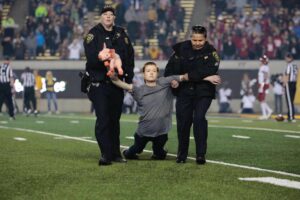 Cassie, holding a toy piglet, being dragged off the field by security

Tune in to find out what happened after her arrest; why she disrupted a football game and why the FBI are searching for Lily and Lizzie, two piglets saved from a previous open rescue.

← Dr. Michael Greger On Being Vegan To Prevent Or Reverse The 15 Leading Causes of Death in North Americans
Heaven is for Animals Too: Animal Ethics in Christianity, plus Advocacy and Vegan Traveling in Hawaii →