In this episode we announce another contest giveaway! We will be giving away a copy of Jason Hribal’s book “Fear of the Animal Planet: The Hidden History of Animal Resistance” to a lucky listener. To enter the draw, please go to our Facebook page “Animal Voices Vancouver” and click on the “Discussions” tab to submit your entry there. Or you can email us your name directly at radioanimalvoices@gmail.com if you’re not on Facebook. To be eligible to win, you must not have won anything from us in the last year and you must be able to pick up your prize from the radio station in downtown Vancouver. Deadline for entries is Friday, February 25th at 9am and we will do the prize draw on the show that day. Good luck!

In the spirit of post-Valentine’s Day euphoria, we also discuss a new website called Rose Pedals Vegan Weddings, dedicated to those who are interested in planning an out-of-this-world proposal or an unforgettable vegan wedding. The site features different kinds of resources to make your cruelty-free wedding dreams come true.

For our first interview, we have Nathan Runkle, Executive Director of the U.S. national non-profit animal advocacy organization Mercy For Animals. Nathan speaks to us about a riveting new short documentary film that MFA has just released to the public in recent weeks called “Farm to Fridge”, narrated by “Babe” actor James Cromwell. This film, which is just under 12 minutes, presents a comprehensive and graphic review of the animal farming industry and shows exactly the conditions, from real recent video footage, of how animals reared for food are raised, treated in the farms, slaughtered, and then delivered to the supermarkets and eventually to your fridge.

Here is the video as presented on YouTube (it can also be viewed at www.meetvideo.com).
Warning: the video does contain graphic images of animal abuse.

For our feature interview, we interview Jason Hribal, who is a historian and educator and has just recently had a book published called “Fear of the Animal Planet: The Hidden History of Animal Resistance”. He talks about this well-researched book, which tells a multitude of stories throughout history of how animals under human captivity have resisted and rebelled against their captors in circuses, zoos, aquariums and research laboratories.

The books tells stories such as about a Siberian tiger at the San Fransisco Zoo who leapt a 12-foot high wall and mauled three visitors who had been tormenting her, killing one; a circus elephant who trampled and gored a sadistic trainer who had repeatedly fed her lit cigarettes; and about an orca at Sea World who snatched his trainer into the pool and held her underwater until she drowned. Jason persuasively argues that the actions of these animals are deliberate, and that through these planned actions, they are fighting for their natural desires for freedom. 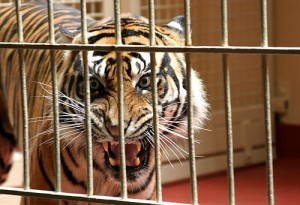 Tatiana the tiger at the San Francisco Zoo

← Dancing Bears in India, and New Codes of Practice for the Care and Handling of Farm Animals in Canada
Crazy Sexy Diet by Kris Carr Book Review, & Pulin Modi from PETA teaches us the ABC’s →

1 comment for “Jason Hribal, The Hidden History of Animal Resistance, and Nathan Runkle, “Farm to Fridge””