In this show, we feature exclusive interviews with pattrice jones on the racist and colonial history of the dairy industry in Vermont, and Amy Davis, founder of the LA Animal Save, on the mother cow Liberty and her newborn calf Indigo who were both rescued in collaboration with Joaquin Phoenix. Also, co-host Alison introduces her new vegan food finds and her experience at the Canadian Health Food Association West trade show last weekend.

pattrice jones is an ecofeminist writer, educator, and intersectional activist who co-founded Veganism is the Next Evolution (VINE) Sanctuary, previously Eastern Shore Sanctuary, for animals rescued from animal agricultural and other industries that depend on the exploitation of them in Springfield, Vermont with her partner Miriam Jones.

They had previously founded Eastern Shore Sanctuary together in rural Maryland back in 2000, but had moved to Vermont in 2009 and decided to continue with their sanctuary work. With the new, more spacious location in Vermont, they were able to continue providing safe haven for larger animals such as cows and sheep along with the many species of birds they had been taking in before.

At VINE Sanctuary, pattrice and Miriam also conduct research and education aimed at creating systemic changes in agriculture, trade, and consumption as well as human attitudes on animals and the environment. They work within an ecofeminist understanding of the interconnection of all life and the intersection of all forms of oppression. From that ideology, they welcome and work to create alliances among animal, environmental, and social justice activists.

As a writer, pattrice jones had written several books on activism and intersection of oppression. pattrice’s most recent work was on her experience in 2012 with trying to rescue two oxen called Bill and Lou who, despite having been unofficial Green Mountain College and town mascots for humans for a decade, were killed and had their bodies were used as products for consumption. The Oxen at the Intersection details this case and includes her sociocultural critique around this situation. VINE Sanctuary had offered space for the two oxen to retire, but this offer was rejected.

Her book Aftershock: Confronting Trauma in a Violent World: A Guide for Activists and their Allies is about the struggle against a world of injustice and atrocities perpetrated by human beings. It includes practical tips for individuals, organizations, and communities, and information on how traumatic events affect our bodies and minds.

In this interview with pattrice jones, we discuss what it’s like for VINE Sanctuary to be LGBTQ-run, especially in the rural area of Vermont where it resides. pattrice also shares how her sanctuary offers an opportunity for imagining a society where a species hierarchies does not exist, nor is challenged. We speak about the lucky liberation of dairy cows who have made it to her sanctuary. And finally, pattrice speaks on how racism an anti-indigeneity persists in the continuation of the modern-day dairy industry, such as in a state like Vermont where humans’ livelihoods depend on the the exploitation of domesticated cows for their milk.

Amy Davis of L.A. Animal Save on the High-Profile Rescue of Mother Cow Liberty and Her Newborn Calf Indigo with Joaquin Phoenix 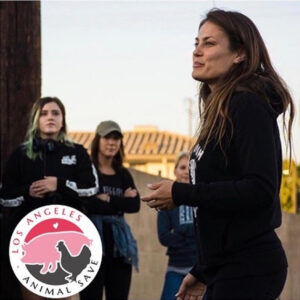 She also works for the production company behind documentaries Earthlings and Unity called Nation Earth, with her partner Shaun Monson, who is the founder of Nation Earth. This company creates films and other media for the animal rights movement. In 2015, she completed her certificate in Plant Based Nutrition from eCornell.

On February 9th of 2020, Joaquin Phoenix took his Oscars speech as an opportunity to advocate for veganism for the animals, for the planet, and for the liberation of all who suffer from system oppression. The day after, he visited a slaughterhouse with a team consisting of Earthlings Director Shaun Monson, L.A. Animal Save Founder Amy Jean Davis, and Farm Sanctuary President and Co-Founder Gene Baur to speak with the slaughterhouse owner and rescue mother cow Liberty and her newborn calf Indigo. They are now safely at Farm Sanctuary to live out their full lives free from the cruel fate they had been born into at the hands of humans and their animal agricultural industries.

In this interview, Amy tells us about the rescue of Liberty and Indigo from the dairy industry slaughterhouse! You can also watch the 8 minute film recently released about it here: