Many vegans differ on their activism strategies.  In fact, some downright argue about tactics employed by their fellow animal liberationists (debates can carry on for weeks after an activist posts a photo of their unique or confrontational strategy). This episode’s discussion is about why some of us feel that the vegan message is so important right now, that the world is ready for it and that encouraging “baby steps” is doing a great injustice to animals who suffer in the dairy, egg and fishing industries, along with animals used for clothing, personal care products and cosmetics, used in entertainment industries or tortured in testing labs. 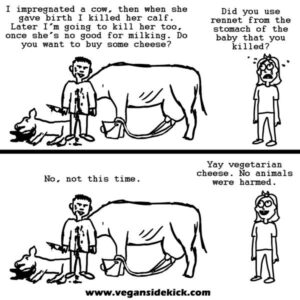 I love to use Vegan Sidekick cartoons to illustrate my feelings on animal rights activism. Google search “vegan sidekick images” to get a sense of the typical characters we activists encounter while doing animal rights outreach.

Activist Brian Brown of Tampa Florida is the Entertainment Director for Solutionary Events, a non-profit organization which holds film screenings Veg Expos and community events teaching people how to be better advocates for people, animals and the environment and promoting veganism. He is also the President of Art For Animal Rights, bringing together artists in the community to spread the vegan message as well as raising money for animal rights initiatives. On top of this, Brian is on the Advisory Board for Florida Voices For Animals. 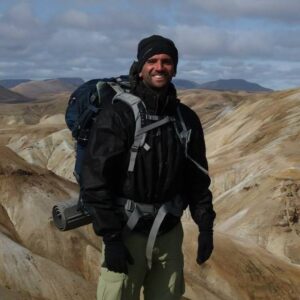 Brian, like many of us, was a vegetarian before going vegan 4 years ago, and today he speaks with us about the importance of spreading the vegan message rather than promoting “baby steps” or vegetarianism. There is much debate about this abolitionist strategy, and Brian and I actually became connected through a Facebook thread on the very topic. A mutual friend of ours had posted a photo of himself advocating for vegetarianism even though he is vegan, which resulted in many activists expressing their opinions or questioning his tactic. I loved what Brian wrote in response to comments promoting vegetarianism as a more effective strategy:

“I used to think so, but these days I really don’t. What happens to animals is essentially the top rung of the “most awful things that can happen to someone” ladder, and it happens because of the paradigm that we have the right to own and use animals for whatever purpose benefits us, with no consideration for their own agency. I fail to see how reducing consumption as a means of absolution proportionate to how much someone ‘feels bad’ for that, but still feels that for some arbitrarily determined amount of time per week or month or whatever, they have the right to pay someone else to subject defenseless animals to horrific torture and mutilation because they don’t feel like eating something else, does anything to remedy that paradigm. Sure, some people find it hard. I honestly couldn’t care less. It’s not hard, but that doesn’t matter. It doesn’t matter whether it’s hard or not. The right thing, as opposed to a frankly absurdly cowardly and selfish thing, isn’t determined based on factors such as convenience or palate preference, it’s based on basic fundamental morality. In this case, paying someone to imprison and torture and stab an animal to death because we didn’t feel like eating something else is plainly wrong, to make the understatement of the century, and making concessions like “it’s ok to do that Tuesday through Sunday, because maybe you’ll eventually someday in the distant future decide not to do it at all” is going way too far in trying to be inclusive. I get that reducitarianism or whatever does prevent some number of animals from being on the production line, and hurts ag industry profit, which is of course a good thing, but that sounds like a job for the business world, not the activist world. Lately, as an activist, I feel like I’m being asked to be an unpaid marketer for Gardein instead of an advocate for real social change.”