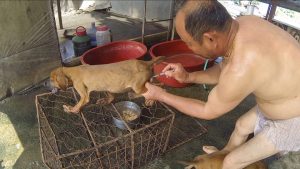 2.5 million dogs and thousands of cats are slaughtered each year in South Korea.

Forced to endure deprivation and unimaginable torture from the moment they are born until the day they are slaughtered, dogs are imprisoned in cramped, filthy, raised cages all their lives with no protection from extreme weather. They get no water, exercise, companionship or medical care, and they never feel the ground beneath their feet. Their eardrums are often burst to prevent them from barking.

In broad daylight, often in front of other live dogs, they are electrocuted, hanged, beaten, have their throats slashed, or are boiled or burnt to death. This is a profit-driven, tax free, unregulated industry that aggressively promotes the myth that eating a dog enhances male virility and stamina. Consumption peaks during the hottest days of summer (Boknal).

Koreans claim that the more a dog suffers, the better its meat is. So many dogs are sadistically made to experience extreme fear and suffering prior to death.

Film-maker James Hyams joins us for a discussion about the social and health costs associated with this industry, as well as the legal issues (eating dog meat is not legal in South Korea but the government and general public fail to enact this law.)

This show will broadcast live on Friday, July 18th, 2017 from Noon to 1pm PST at 100.5fm CFRO in Vancouver, Canada and at coopradio.org via online streaming. It will then be posted here as a podcast shortly thereafter, so please do check back soon!