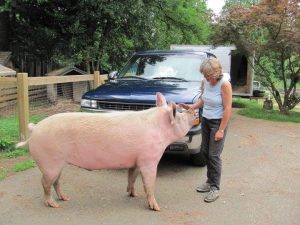 Janice Gillett and one of her 45 pigs.

In today’s show we speak with Janice Gillett, who founded “Hearts On Noses” pig sanctuary in 1999 for the care of pot-bellied pigs (“mini pigs”) which were a trendy pet in the 1980’s, yet often abandoned or given away due to lack of awareness about the lifetime care they would require.

The sanctuary currently houses over 40 pigs, as well as a horse, a cat, two dogs and a  turtle, and is always in need of donations and volunteer work for the ongoing expenses and up-keep of the property. Have you ever considered hosting a volunteer potluck party involving some cuddles with the pigs? You are more than welcome, and no party is too big or small. Hearts On Noses promotes kindness to all animals, and offers education about living a compassionate, vegan lifestyle to its visitors.

The latest announcement by the Vancouver Aquarium to bring 3-5 beluga whales back from other facilities where they are “on loan” angers animal rights activists and the public who are skeptical that any so-called “research” performed at the facility is the main reason for having these wild, sentient beings in captivity.

Gary Charbonneau, creator of the 2015 documentary “Vancouver Aquarium Uncovered” offers his critique of this decision, which matches that of many cetacean experts, touching on the irresponsibility of bringing in more cetaceans before finding a cause of the recent 2 beluga deaths within 9 days of each other.  These beluga deaths left the tanks empty, and had given animal rights activists a glimmer of hope that this could signal the end of at least some animal exploitation at the facility. It is well-documented that animals do not thrive in captivity, rather they live a fraction of their potential life-spans and often suffer from issues that are specific to captivity, especially when allowed to interact physically with the public, increasing the risk of zoonosis. 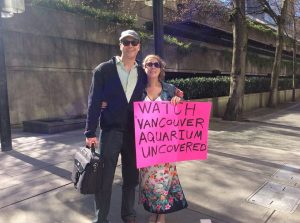 Public pressure has been increasing over the past few months, with activists from the group “No More Dead Cetaceans” regularly attending Vancouver Park Board meetings and politely demanding that commissioners step up to protect the animals who unfortunately lack autonomy at the facility which leases land from the city.

← Love for Companion Animals and Justice for BC Grizzlies
The International Women’s Day Show: Uncovering the Connections Between Feminism and Animal Rights, with Carol J. Adams →

5 comments for “Hearts On Noses Pig Sanctuary, and Ongoing Captivity at the Vancouver Aquarium”